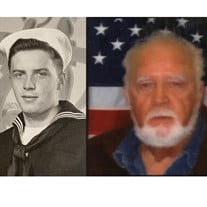 Frederick M. “Fritz” Strupp, 86, of Palmyra, passed away on Tuesday August 17, 2021 at The Lebanon VA Medical Center. He was the husband of the late Joyce L. (Brightbill) Strupp, who passed away in 1993. Fritz was born in Palmyra on November 18, 1934 to the late Christian and Clara (Templin) Strupp. He served in the United States Navy from 1952 – 1955 on the USS Midway during the Korean Conflict and worked for John Stapf and Ritter Brothers as a cement mason. He enjoyed spending time with his family having picnics in his back yard, and telling Navy stories to his kids, grandkids (and anyone that would listen), as well as fishing, playing the lottery, slot machines at the casino, and shooting pool and darts. Fritz was a member of the Palmyra VFW, Plasterers and Cement Masons Union and C-B Sportsmen’s Club. Surviving are his children, Vicki Lingle and her husband Dale of Annville, Frederick Strupp II, and his wife Robin of Annville, Brenda Kolakowski and her husband Doug of Palmyra and Angela Early of Palmyra; eight grandchildren, Nicole (Shawn) Brandt, Kevin (Emily) Strupp, Brandon (Katie) Kolakowski, Eric Kolakowski, Ryan, Megan and Nick Early, and Dale Lingle; three great-grandchildren, Lindsay and Cooper Brandt and Caleb Strupp; a sister Cynthia Rhoads of Carlisle and many nieces and nephews. He was preceded in death by his siblings, Lloyd Strupp, Russell Strupp, Calvin Strupp, Christian Strupp, Harry Strupp, Josephine Kapp, Pauline DeHart, Elmira Good, Florence Kingsboro, Clara DiScuillo and Grace McDonnell. A viewing will be held on Monday August 23, 2021 from 10AM until 11AM at Kreamer Funeral Home and Crematory Inc., 618 E. Main Street, Annville. A graveside service with military honors will be held at 11:30AM at Gravel Hill Cemetery, Palmyra. In lieu of flowers, donations can be made to the Lebanon VA Medical Center, 1700 S. Lincoln Ave., Lebanon, PA 17042.

The family of Frederick M. "Fritz" Strupp created this Life Tributes page to make it easy to share your memories.

Frederick M. “Fritz” Strupp, 86, of Palmyra, passed away on Tuesday...

Send flowers to the Strupp family.