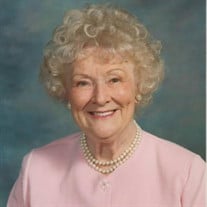 Elynore A. Uhl, 96, died Monday, March 15, 2021 at Cedar Haven Nursing Home from old age. She was the wife of the late John R. “Jack” Uhl, who passed away in 2005. Born in Philadelphia on February 26, 1925, she was the daughter of the late Victor and Rena (Davis) Adams. Elynore graduated with honors from Millville High School (PA) in 1942. Before marrying, Elynore was a Graphic Arts Draftsman for the Bell Telephone Co. in Philadelphia. In her later years, she was a homemaker, professional cake decorator, and worked in the office at Ballroom Break Dance Studio in Lewisberry, PA. Elynore had a way of making people smile and everyone loved her. She led a very active life of service to others and the community. Elynore was a former member of West Shore Baptist Church, Camp Hill, where she taught Sunday school. She was a member of White Rose Cake Decorating Club of York, former President of C.A.K.E. of Harrisburg, and winner of over 180 trophies for cake decorating competitions from the International Cake Exploration Society. Elynore was also a member of Telephone Pioneers, West Shore Civic Club, TOPS, Harrisburg Bicycle Club, and volunteered at Country Meadows, Mechanicsburg. She enjoyed ballroom dancing, singing, learning new languages, illuminating and calligraphy, doing crossword puzzles, and bird watching. Surviving are her son John J. Uhl and daughter-in-law LuAnn M. Uhl of Annville, foster son Timothy A. Klein of Tempe, AZ, and grandson Russell J. Uhl of Rochester, NY. Graveside services will be held at the convenience of the family. In lieu of flowers, contributions may be made to West Shore Baptist Church, 2025 Market St, Camp Hill, PA 17011 or the American Cancer Society, PO Box 42040, Oklahoma City, OK 73123.

The family of Elynore A. Uhl created this Life Tributes page to make it easy to share your memories.

Send flowers to the Uhl family.