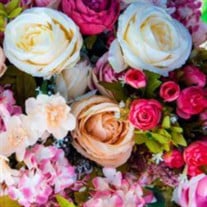 Elsie M. “Pat” Kleinfelter, 90, of Lebanon, passed away on Thursday, April 22, 2021 at Masonic Village. She was the wife of the late, Sterling E. Kleinfelter, who passed away in 2002. Elsie was born in Fredericksburg, PA on July 7, 1930 to the late Earl and Lizzie (Bomberger) Patches. She was a 1947 Stouchsburg High School graduate. She was a waitress at Heisey’s Diner and a tax collector for N. Lebanon Twp. She was a member of Ebenezer United Methodist Church and attended Mountville United Methodist Church, she enjoyed going to church. She also enjoyed playing BINGO and sitting at her house watching all the wildlife outside her back window. Surviving is her son, David E. Kleinfelter of Lewistown, grandchildren, Kristen A. Gilbert and her husband Colin, Kenneth D. Kleinfelter and his wife Amber, great grandchildren, Taylor Gilbert and Kathleen Gilbert, and her siblings, Dennis Patches and his wife Sharon of Jonestown, Dale Patches and his wife Abigail of Chilothe, OH, Ruth Kapp of New Holland, and a sister-in-law, Dana Patches of Palmyra. She is also survived by several nieces and nephews. She was preceded in death by her daughter, Sue Ann Wolfe and her husband James, a granddaughter, Audrey Kleinfelter, her brother, Donald Patches, and a brother-in-law, Charles Kapp. A funeral service will be held on Friday, April 30, 2021 at 10:30AM from Kreamer Funeral Home and Crematory Inc., 618 E. Main Street, Annville. Interment will be held privately at Indiantown Gap National Cemetery, Annville. There will be a viewing from 9:30AM – 10:30AM at the funeral home. In lieu of flowers, contributions can be made to Ebenezer United Methodist Church, Building Fund, 1776 Rt 72 North, Lebanon, PA 17046.

The family of Elsie M. "Pat" Kleinfelter created this Life Tributes page to make it easy to share your memories.

Send flowers to the Kleinfelter family.