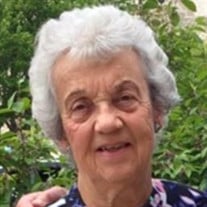 Elizabeth Ann Kalb, 84, formerly of Lebanon, PA and Galesburg, IL, died Friday, September 3, 2021 at Brethren Village, Lititz, PA with her children by her side. She was the wife of the late Theodore F. Kalb who died March 6, 2021. They celebrated 62 years of marriage together. Born in Monmouth, IL on December 11, 1936, she was the daughter of the late Carlton and Mary Robson Gossett. She was a graduate of Roseville High School in Roseville, IL and Southern Illinois University. Liz was a homemaker and former Home Economics teacher at Newark High School in Newark, IL and Avon High School in Avon, IL. After moving to Lebanon, PA in 1976, the family joined St. Andrew’s Presbyterian Church, where Liz became an active member, served as both Elder and Deacon, and was heavily involved in the Presbyterian Women organization. She enjoyed helping others and spent much of her time involved in service groups and volunteer activities through the church. Liz was also a member of the Lebanon County Home Economics Club. While at home, she enjoyed gardening and reading. “My greatest joys are my children and grandchildren. I love being a mother and grandmother.” Liz is survived by a daughter, Deborah L., wife of Lewis P. Chillot of Lititz, PA; a son, Kevin T. Kalb and his partner, Selena Csapo of Philadelphia; four grandchildren, Lindsey Chillot Puskar, wife of Alexander Puskar; Darren Chillot; Meredith Kalb; and Kevin “Ted” Kalb, Jr. and fiancée, Shelby Schweitzer; and a brother William C. Gossett of Roseville, Illinois. She was preceded in death by a brother George R. Gossett. A funeral service will be held at 10 AM on Friday, September 10, 2021 at St. Andrew’s Presbyterian Church, 600 S. 12th Street, Lebanon, PA. A viewing will be held from 9-10 AM prior to the service. Interment will be in Indiantown Gap National Cemetery at the convenience of the family. In lieu of flowers, contributions may be made to St. Andrews Presbyterian Church in Liz’s name. Kreamer Funeral Home and Crematory, Annville, PA is handling the arrangements.

Elizabeth Ann Kalb, 84, formerly of Lebanon, PA and Galesburg, IL, died Friday, September 3, 2021 at Brethren Village, Lititz, PA with her children by her side. She was the wife of the late Theodore F. Kalb who died March 6, 2021. They... View Obituary & Service Information

The family of Elizabeth Ann Kalb created this Life Tributes page to make it easy to share your memories.

Send flowers to the Kalb family.