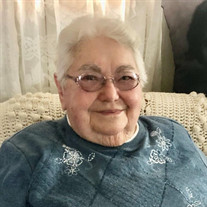 Dolores F. Wolfe, 91, of Annville died peacefully surrounded by family Saturday, April 2, 2022 in Annville. She was the wife of the late Gerald B. Wolfe who died in 1990. Born in Annville on May 22, 1930, she was the daughter of the late Allen and Myrtle (Troutman) Fasnacht. Dolores was a 1947 graduate of Jonestown High School, a member of Christ Church United Church of Christ, Annville where she served as a Sunday School teacher beginning at the age of 16. She also served on Consistory, and the Women’s Guild. Dolores served on the kitchen committee at church for special meals and soup sales. She was well known for her cooking, baking, and catering. Dolores was the cafeteria manager for A-C Schools, Dietary Manager at the Lebanon Valley Home and operated the concession stand at the A-C pool and was part owner and manager of the Olde Annville Inn. Dolores participated in the MS Walk for more then 30 years and raised large amounts of money for the society over the years. She also served with the Bellegrove Fire Co. Auxiliary. Surviving is a son, Jerry husband of Shirley Wolfe of Annville, son-in-law Joseph Hoffman, four grandchildren David Wolfe and partner Dave Painter, John Wolfe, Janelle Camacho and husband Hubert, Edward Hoffman and wife Jaime; eight great-grandchildren; two sisters Shirley Hoerner and Judy Barchet both of Annville; sisters-in-law Betsy Fasnacht and Dorothy Fasnacht; many cousins, nieces and nephews. She was preceded in death by her daughter Donna M. Hoffman, two brothers Robert and Daniel Fasnacht and a sister Joanna Zimmerman. Memorial services will be held at Christ Church United Church of Christ, 200 South White Oak St., Annville on Sunday, May 22, 2022 at 2:00 PM with a visitation from 1PM until the time of her service. A luncheon will follow the service. Private inurnment will be held at Grand View Memorial Park, Annville. Donations may be made to Christ Church, 200 South White Oak St., Annville, PA 17003 or MS Society c/o Pennsylvania Keystone Chapter, 1501 Reedsdale Street, Suite 105, Pittsburgh, PA 15233.

Dolores F. Wolfe, 91, of Annville died peacefully surrounded by family Saturday, April 2, 2022 in Annville. She was the wife of the late Gerald B. Wolfe who died in 1990. Born in Annville on May 22, 1930, she was the daughter of the late Allen... View Obituary & Service Information

The family of Dolores F. Wolfe created this Life Tributes page to make it easy to share your memories.

Send flowers to the Wolfe family.