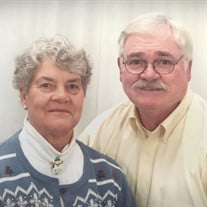 Curtis H. Smith, 78, and Darlene Faye (Houser) Smith, 79, most recently of North Carolina passed away. Curtis passed away on July 6, 2020 and Darlene passed away October 25, 2020. Curtis and Darlene were happily married for 60 years. Curtis was born in Hershey, PA on October 2, 1941 to the late H. Glenn and E. Beverly (Heatwole) Smith. He was a 1959 Annville-Cleona High School graduate. Curtis served in the National Guard from 1961-1964 as a member of the military police. Curtis was a member of the military police and National Guard for the US Army from 1961-1964. He was a printer for Pemcor, Inc., and had worked at Lebanon Valley Offset and Sowers Printing. Curtis was a member of Campbelltown United Methodist Church. He loved sports and was a die-hard Philadelphia Phillies, Eagles and Penn State fan. Curtis was also an avid golfer and fisherman who loved spending time at the beach. Darlene was born in Palmyra, PA on September 14, 1941 to the late Harold and Sylvia A. (Bolen) Houser. She had attended Palmyra High School. She was a factory worker at Hershey Chocolate Company, Kraft Foods and Annville Shoulder Strap. She was a member of Campbelltown United Methodist Church. She enjoyed bowling, crafts, camping, vacations at the beach and spending time with family & friends. They are survived by their children, Glenda (Smith) Clare and her husband Daniel of Charlotte, NC; Dana (Smith) Langley and her husband Billy of Concord, NC; C. Kevin Smith and his wife Karen of Palmyra, PA; five grandchildren and four great grandchildren. Curtis Smith was preceded in death by brothers Donald Smith, Lowell Smith and sister Shelby (Smith) Berkhimer. Darlene Smith, survived by sister Ruth Ann (Houser) Forney of Manning, SC. and preceded in death by brother Harold Houser, Cleveland, OH; Kenneth Houser, Hershey, PA. Visitation will be held Friday, June 4, 2021 from 9am - 10am followed by Memorial Service at 10am at Kreamer Funeral Home and Crematory Inc., 618 E. Main Street, Annville. Interment will be in Indiantown Gap National Cemetery at 11:30am with military honors for Curtis Smith. In lieu of flowers, contributions can be made to The American Diabetes Association, 301 Chestnut Street, Suite 101, Harrisburg, PA 17101 or The American Cancer Society, PO Box 42040, Oklahoma City, OK, 73123.

The family of Curtis H. Smith & Darlene Faye (Houser) Smith created this Life Tributes page to make it easy to share your memories.