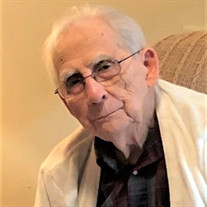 Clarence M. Krammes, 99, of Cornwall, passed away on Sunday, November 7, 2021, at Cornwall Manor. He was the husband of Rose R. (Moser) Krammes. They celebrated their 75th wedding anniversary on May 1, 2021. Their marriage lasted all these years because of Clarence’s love & respect for Rose. Born in Rock, PA on April 10, 1922, he was the son of the late Ira S. and Verna (Miller) Krammes. He was a graduate of Cressona High School. He then enlisted and served his country in the Army Air Force Corps. He was part of the 853 Bomb Squadron and 491 Bomb group. He was stationed at Olmstead Air Force Base. His squadron was sent to Houlton, ME, and NC, East Anglia, England, Germany, and European Theatre. His squadron was involved in the campaigns of Ardennes, Central Europe, Rhineland, and Northern France. He was a gunner and flew 25 missions over Europe. He attained the rank of Staff Sergeant. He was awarded the Purple Heart, EAME Ribbon with 4 Bronze Stars, Air Medal with 5 Oak Leaf Clusters and the Good Conduct Medal. When he was discharged from the Army, he went on to further his education. He received a B.A. in English and his Master’s Degree from Kutztown State College and his principal certification from Lehigh University. Clarence attended St. Matthew’s Lutheran Church in Schuylkill Haven, where he taught Sunday School. When he and Rose moved to Fredericksburg, they attended St. John’s Lutheran Church in Fredericksburg, where he served on the church council. He led a life of service for God, country, and his wonderful wife Rose. Clarence taught English, Social Studies, and Geography at Northern Lebanon High School from 1950 to 1959. From 1960 until his retirement in 1981, Clarence served as the Secondary School Principal. He also was the Supervising Principal. He was beloved by his family, friends, and students. During his retirement he was very involved with a retired teachers’ breakfast group with whom he went to breakfast once a month. Clarence was a member of the Fredericksburg Lions Club. He was an avid fan of football and baseball, especially the Eagles and the Phillies. In addition to his wife, he is survived by his sister Charlotte wife of Frederick Wooky of Pottstown, and many nieces & nephews. He was preceded in death by his sister Helen Rubright, and brothers Ira Krammes, Kermit Krammes, Mervin “Bud” Krammes and Terry Krammes. Funeral services will be held at 12:30 p.m. on Thursday, November 18, 2021, at Kreamer & Lum Funeral Home & Crematory, Rt. 72 & Camp Meeting Rd., Jonestown. Interment will follow at Indiantown Gap National Cemetery. A visitation will be from 11:30 a.m. to 12:30 p.m. prior to the service at the funeral home. The family requests that everybody wear a mask. In lieu of flowers, contributions can be made to www.woundedwarriorproject.org , or to his church at P.O. Box 173, Fredericksburg, PA 17026.

Clarence M. Krammes, 99, of Cornwall, passed away on Sunday, November 7, 2021, at Cornwall Manor. He was the husband of Rose R. (Moser) Krammes. They celebrated their 75th wedding anniversary on May 1, 2021. Their marriage lasted all these years... View Obituary & Service Information

The family of Clarence M. Krammes created this Life Tributes page to make it easy to share your memories.

Send flowers to the Krammes family.