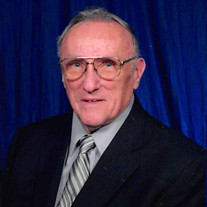 Clarence “Ben” Dohner, 88, of Annville died Monday, June 21, 2021, at the Hershey Medical Center. He was the husband of Doris G. Peiffer Dohner. Born in Lebanon on February 19, 1933, he was the son of the late Clarence S. Dohner and the late Josephine M. Seabold Dohner. Ben was a Veteran of the United States Army during the Korean War. He attended St. Stephens Christian Fellowship Church in Lebanon and was a member of the Annville-Cleona School Board, and the Lebanon Career and Technology Center School Board. Surviving in addition to his wife is a son, Douglas Dohner, husband of Shawnie of Texas, a daughter, Dawn Breidigan of Delaware, a sister, Janice Ream of Lebanon, 3 grandchildren, Casey Breidigan, Timothy Breidigan, Scott Dohner, and a great granddaughter, Brooklyn. He is preceded in death by his 2 sisters, Joanne Martin, and Mary Jane Pavenski. A public viewing will be held from 6:00PM to 8:00PM on Monday, June 28 at Kreamer Funeral Home and Crematory, 618 East Main Street Annville, PA 17003. An additional public viewing will be held from 8:30AM to 9:30AM on Tuesday, June 29 at the Funeral Home. Burial with Military Honors will be held at 10:00AM on Tuesday at the Indiantown Gap National Cemetery. Kreamer Funeral Home and Crematory, Annville is overseeing arrangements.

The family of Clarence Ben Dohner created this Life Tributes page to make it easy to share your memories.

Send flowers to the Dohner family.