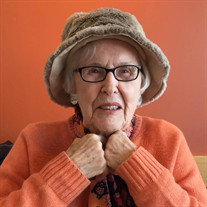 Clare Cecelia Berger of Stroudsburg, PA., passed away peacefully at home Jan. 17th, on her 96th birthday, surrounded by her children. She was preceded in death by her husband of over 68 years, Alvin C. Berger, who died in 2016. She is survived by her children, JoEllen Gailey and her husband John of Malvern, Pa.; Leslie Berger of Stroudsburg; Karl Berger and his wife, Maribeth Visco of Frederick, Md.; Jean Boheim and her husband Chris of Tannersville, Pa.; as well as grandchildren Alex Gailey, Isabelle Berger, Toby Berger, Tristan Boheim and numerous nieces and nephews who claim her as their favorite aunt. Clare was born in Lebanon, Pa, on Jan, 17, 1925, a twin and the last child of Mary and H. Jacob Schaeffer. Her father died when she was two years old and in her later years, Clare often marveled at how her mother managed to raise six children on her own through the lean years of the Great depression. Her mother lived into her 97thyear, having passed on a good portion of her grit and determination to her daughter. Clare attended Catholic school as a girl and then Lebanon Valley College during the War years, graduating in 1946. She met her husband there and after college, began a career as a schoolteacher in Lebanon County, Pa. that was interrupted when her husband began graduate school in New York City. Clare worked at Macy's and the Columbia University Library while she & Al nurtured a love of the theater and opera. Later, settling in the Poconos allowed them to go back to the city for concerts and plays while remaining close to their families in Lebanon. When their last child reached school age, Clare resumed teaching in Stroudsburg. She was a well-regarded and much-appreciated second grade teacher at Clearview Elementary School for 20 years until her retirement in 1986. No one’s life can be adequately depicted in a set of words, particularly those, like Clare, whose achievements far exceed the standard accomplishments of professional and civic life. She liked to travel and with her husband saw much of Europe, making friends wherever they went. She could strike up a conversation with anyone. She loved gardens and especially flowers, favored dessert over main courses, enjoyed a good game of bridge, and preferred reading to watching television. In her last weeks she was making her way slowly through Tolkien’s “The Hobbit.” Above all, she went through life as the poet’s blithe spirit. Her good cheer was boundless, a joy forever, an inspiration to all she encountered. Private burial will take place at Mt Annville Cemetery in Annville, PA. A celebration of her well-lived life will take place later this year. In lieu of flowers memorial contributions may be made to The Nature Conservancy.

Clare Cecelia Berger of Stroudsburg, PA., passed away peacefully at home Jan. 17th, on her 96th birthday, surrounded by her children. She was preceded in death by her husband of over 68 years, Alvin C. Berger, who died in 2016.... View Obituary & Service Information

The family of Clare Cecelia Berger created this Life Tributes page to make it easy to share your memories.

Send flowers to the Berger family.