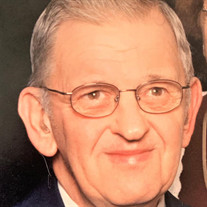 Carl H. “Pete” Bensing, 87, of Lebanon, passed away on Tuesday, November 30, 2021, at WellSpan GSH-Lebanon. He was the husband of Shirley K. Wagner Bensing. On September 6th, they celebrated their 62nd wedding anniversary. Born in Lebanon on July 18, 1934, he was the son of the late Peter and Elsie Hower Bensing. He was a graduate of South Lebanon High School with the Class of 1952. Pete, along with his brother Bob, owned and operated Bensing Brothers Garage on S. 3rd Ave. in Lebanon. He was a member of the Hebron United Methodist Church. For twenty-four years he delivered Meals on Wheels. He was a life member of the Kittatinny Hunting and Fishing Club, and he served as their financial secretary for 40 years. He also served in the U.S. Army. In addition to his wife, he is survived by his daughter Susan M. Bensing of Lebanon; sisters Geraldine Bensing and Mary Mease, both of Lebanon; grandchildren Timothy (Arie) Garrett and Elisabeth (James Patrick) Chambliss; great grandchildren Johanna and James Garrett; special cousin LaVerne of Allentown; and several nieces and nephews. He was preceded in death by his brother Robert husband of Betty Bensing of Lebanon. Funeral services will be held at 11:00 a.m. on Monday, December 6, 2021, at the Kreamer & Lum Funeral Home & Crematory, Rt. 72 & Camp Meeting Rd., Jonestown. A viewing will be held on Sunday from 4:00–6:00 p.m. at the funeral home and one hour prior to the service on Monday. Interment will follow at Cedar Hill Cemetery. In lieu of flowers, memorial contributions may be made to his church at 451 E. Walnut St., Lebanon 17042 or to the Parkinsons Foundation, 1359 Broadway, Suite 1509, New York, NY 10018.

The family of Carl H. "Pete" Bensing created this Life Tributes page to make it easy to share your memories.

Send flowers to the Bensing family.