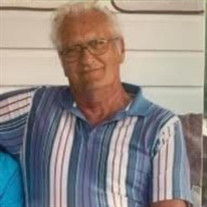 Arthur Lewis “Sonny” Biever, Jr, 91, of Lebanon, passed away on Thursday, November 18, 2021, at WellSpan GSH-Lebanon. He was the husband of Nancy E. Shultz Biever. On April 4, they celebrated their 68th wedding anniversary. Born in Cresaptown, MD on February 4, 1930, he was the son of the late Arthur L. and Margaret (Botz) Biever. Art served in the U.S. Air Force during the Korean Conflict. He retired from the VA Medical Center after 30 years of service. He was a member of the Fredericksburg United Methodist Church. He had been an avid hunter and he loved football and baseball. Art was known for his wicked sense of humor, and he always had jokes to share. He especially loved spending time with his grandchildren and great grandchildren. In addition to his wife, he is survived by his daughter Cynthia L. wife of Duke Miller of Lebanon; son Timothy S. husband of Dori Biever of Jonestown; grandchildren Jacy Riel of Longmont, CO, Jody wife of Scott Boyd of Lebanon and Ryan Biever of Austin, TX; great grandchildren Carmen, Ben, Zoe and Gracyn; and his sister Shirley Terry of Sarasota, FL. He was preceded in death by sisters Dorothy Keath, Marion Lee Miller and Mildred Detweiler who he could not wait to go to his heavenly home to be with. A graveside service will be held on Monday, November 29, 2021, at 11:00 a.m. at Indiantown Gap National Cemetery. A procession will be leaving the Kreamer & Lum Funeral Home & Crematory, Rt. 72 & Camp Meeting Rd., Jonestown at 10:30. Because of his love for all animals and his dedication and love for his country, memorial contributions may be made to the Humane Society of Lebanon Co., or to the Wounded Warrior Project.

The family of Arthur L. "Sonny" Biever, Jr. created this Life Tributes page to make it easy to share your memories.