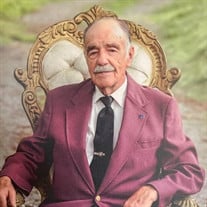 Born August 3, 1928 to Joseph J and Emma (Heinbach) Kramer, he was the second son but third child. His siblings included Calvin C, Josephine and Robert R. All deceased. Joseph was a WWI Veteran who worked in the tannery and sold eggs door to... View Obituary & Service Information

The family of Arlin A. Kramer, Sr. created this Life Tributes page to make it easy to share your memories.

Send flowers to the Kramer family.